Chapters earn “pearls” from June 1 through May 31 each year.  One “pearl” is awarded for the attainment of each of the criteria listed up to a maximum of seven.  A chapter will be recognized as a “7-Pearl” chapter if it meets at least seven of the criteria listed, including the first three which are required.

Chapters earn “pearls” from June 1 through May 31 based on
the following criteria:
*1.  Positive chapter growth by May 31.
*2.  IRS Form 990; 990-EZ;
OR
990-N ePostcard must be filed by
the 15th day of the fifth month following the chapter’s fiscal
year-end, with a copy of confirmation sent to International
Headquarters.
*3.  Timely Reporting
a. Annual Chapter Highlights Summary (H-114) submitted
to Headquarters by August 1, reporting meetings from
June 1 through May 31 (can be submitted online);
b. H-138 Member Payment Record with dues and fees paid to
Headquarters and postmarked no later than January 31.
4.  Pink copy of Membership Action Plan (H-128) with first three
columns (Part A) completed and submitted to International
Headquarters by October 15 (even year). Yellow copy of MAP
with the last column (Part B) completed and submitted to
International Headquarters no later than October 15 (odd year).
(Can be submitted online)
5.  Chapter Balance (15 or more members with at least 50
percent of the members actively engaged/employed in
education).
6.  Retention Rate of 90 percent or higher [Number of members
at chapter year end (May 31 of current year) minus any new
members divided by the number of members at the chapter
year beginning (June of last year)].
7.  Chapter represented at International Convention (For the
reporting period June 1, 2013 - May 31, 2014).
8.  Observed Alpha Delta Kappa Month.
9.  Colonized or sponsored a new chapter

Awarded by the California State Executive Board, this is the highest award a chapter can earn.  It is based on participation, altruism, and member growth.  Beta Eta has the distinction of winning this award THREE times! 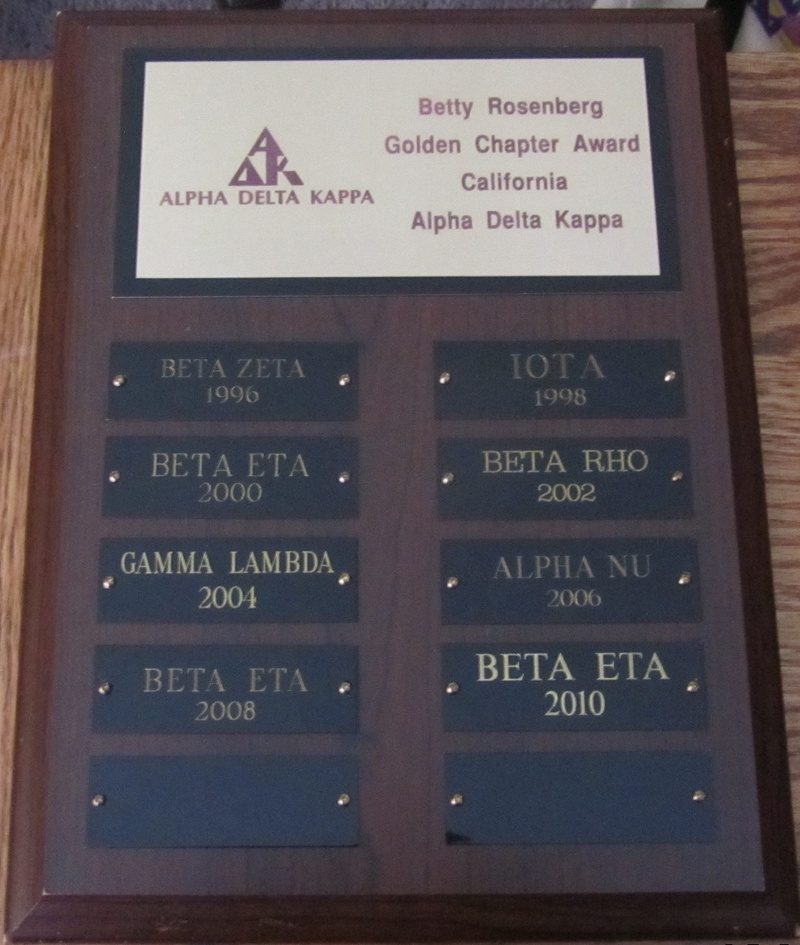 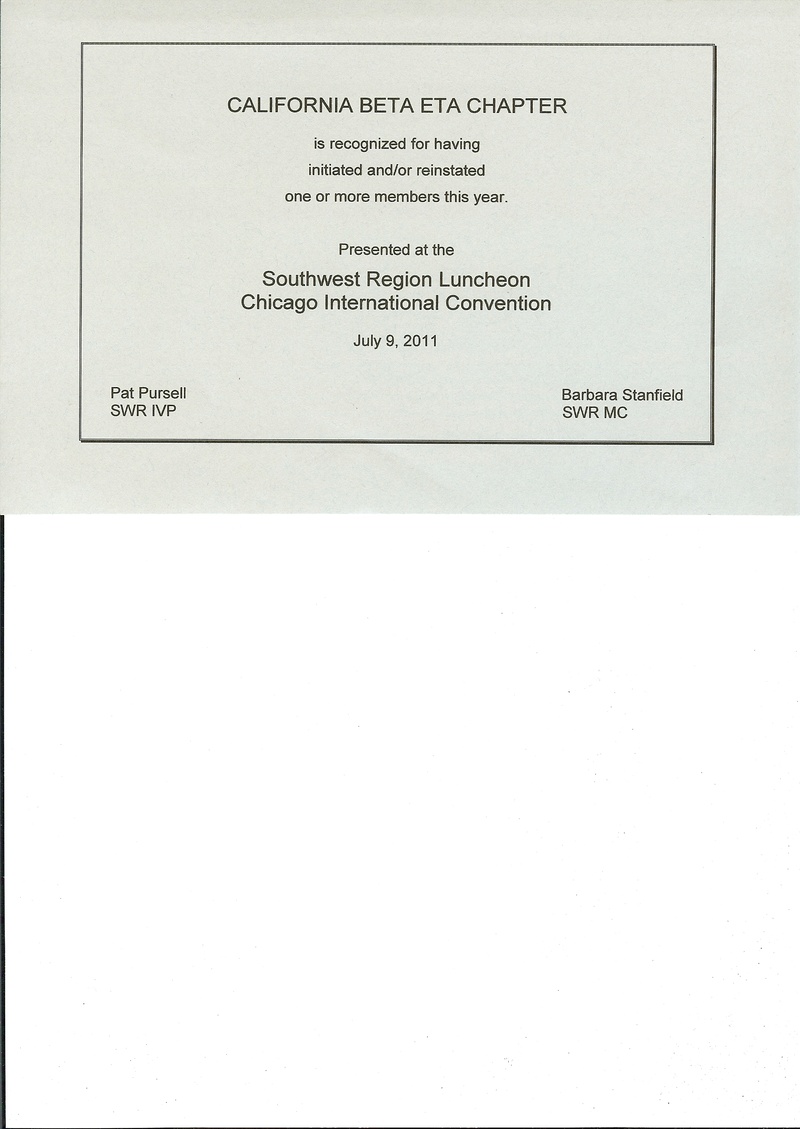 Susan B Komen Race for the Cure 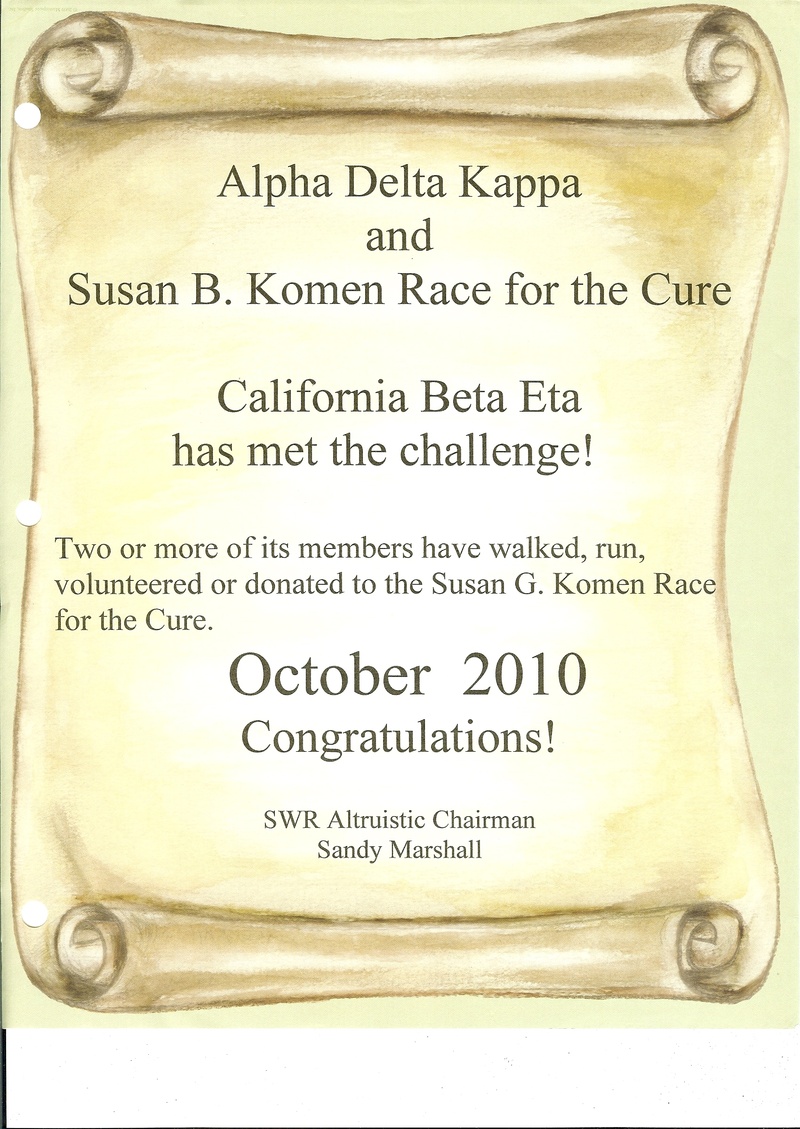